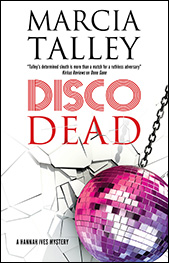 Hannah Ives enjoys her expeditions to local cemeteries to help people find their ancestors. On one such visit, Hannah is surprised when she encounters Isabel ‘Izzy’ Randall laying flowers on the grave of Amy Madison, a college senior who was killed in 1978. Amy was last seen in a popular Annapolis disco bar, and her murder remains unsolved.

Hannah’s interest in the case leads her to join Silent Sleuths, a small group of ‘citizen detectives’ dedicated to solving cases like Amy’s, and their research soon suggests that Amy may have been the first of several victims targeted by a serial killer. DNA from the scene of Amy’s murder reveals surprising results, which steers the group’s investigation in an unexpected direction. Is Amy’s killer still alive, or gone beyond the reach of justice?

“A 1978 murder … drives Talley’s satisfying 19th mystery. [Readers] will appreciate that the characters rely on brains rather than brawn. This intelligent mystery series deserves a long run.”

“The telling details that urge readers along the way might even end up teaching them something.”

And check out this rave review in Booklist:

“The long-running Hannah Ives Mystery series shows no signs of slowing down. In this nineteenthentry since 1999’s Sing It to Her Bones, the cancer survivor and amateur sleuth digs into adecades-old murder case and unearths some modern-day surprises. As good as the puzzles inthis series are, most readers probably don’t come to the Ives books for the mysteries—theycome for the characters. Hannah is a perfectly drawn lead, a part-time crime solver who mustjuggle friends, family, and serious medical issues, along with all manner of everyday concerns.She may be an amateur sleuth, but she lives very much in the real world . As always, she’ssurrounded here by a delightful cast of supporting players, including the members of the SilentSleuths, a colorful group of amateur detectives with whom Hannah happily joins forces. Somelong-running series have their ups and downs, but the Ives series has been remarkably consistent.”— David Pitt 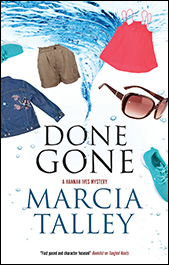 Hannah Ives is worried when her friends and long-time neighbours, Peter and Trish Young, are a surprising no-show at her Italian night. The couple seem to have vanished without a trace. Have they made a quick getaway and ‘done gone’?

“The smart, principled main character, along with the richly described Annapolis, MD, setting and the warm family relationships at the heart of the story, are the main sources of appeal here.”

Photos in banner by Ron Belanger.