She lost her job. She almost lost her life. Now Hannah Ives is taking her first brave steps back into the world, wearing a wig and her heart on her sleeve after a frightening bout with breast cancer. But in the small Chesapeake Bay town where she came for a vacation, she does not find the relaxation she deserves. Instead Hannah finds a body—of a girl who disappeared eight years before.

Hannah Ives has every reason to mind her own business. Having survived a recent bout with breast cancer, she’s opting for reconstructive surgery and a fresh start. Her Annapolis home is decorated for better feng shui. Her parents are living close by. And her sister, Georgina, is finally getting help for recurring depression. Everything is coming up roses—until her sister’s therapist takes a nosedive off a balcony. Now, with Georgina a prime suspect in the murder, Hannah needs to do some analysis of her own. A few pages torn from an appointment book may hold a crucial clue. And some bizarre memories from her sister’s past may point to a motive… if Hannah can keep a clear head and dare to enter the darkness of a killer’s twisted mind.

The guests were off the wall. The would-be groom was off the wagon. And the bride certainly wasn’t blushing.

Aside from that, it was the perfect occasion: a party for Hannah Ives’s widowed father and the younger woman he had suddenly decided to marry. Then the evening takes a strange turn, with a sudden death and disappearance.

For Hannah, the stunning turn of events came after a Christmas season slide into anger and confusion. First her father had found a floozy who had already buried three husbands. Then her late mother’s jewelry started showing up around the gold digger’s neck.

Now Hannah, who has just put her life together after a bout with cancer, is desperately searching for her missing father. Because this poor man has either made a terrible mistake, committed a terrible crime, or fallen victim to a killer who seized the moment for murder…

Hannah Ives struggled bravely through the ravages of illness, and fellow patient Valerie Stone was at her side. As cancer survivors they have a lot to celebrate when they meet again, but their reunion is short-lived. Soon Valerie is dead, and a suspicious Hannah must sift through a mountain of clues trying to uncover the cause of her friend’s untimely death. But there are those in the big business of living and dying who think she’s becoming too curious… and it’s high time her questions were silenced.

Hannah Ives is always ready to support others like herself who have been through the gauntlet of fear and uncertainty that a diagnosis of cancer often brings. So when friend and fellow survivor Dorothy Hart asks for help building sets for the Naval Academy’s upcoming production of Sweeney Todd, Hannah readily agrees.

But it means associating with an old foe—a vindictive officer whose accusations once nearly destroyed Hannah’s home life. And when one corpse too many appears during a dress rehearsal of the dark and bloody musical, Hannah finds herself accused of murder—and enmeshed in a web of treachery and deception that rivals the one that damned the “Demon Barber.”

Caught up in a drama as sinister as any that has ever unfolded on stage, Hannah stands to lose everything unless she unmasks a killer before the final curtain falls …

Cancer survivor Hannah Ives looked Death in the eye… and walked away victorious. But the terror she once felt in its shadow pales before the ice-cold fear that now grips her heart in the wake of an unthinkable crime: the kidnapping of Hannah’s innocent grandson.

One-year-old Tim vanished from the day care center at the luxurious upscale spa his parents recently opened, and the lack of a ransom note suggests the innocent child may have fallen into the hands of the worst sort of fiend. Hannah will find no peace until the boy is found and his abductor punished—not even taking comfort in the caring words of a dear friend and spiritual advisor whose own life and marriage may be haunted by something dark and sinister. But the hunt may be leading Hannah to places she never dreamed she’d have to go. 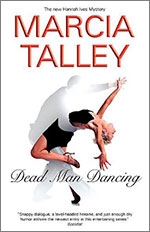 Driving a wedge between Ruth and her fiance, Hutch, is not what Hannah intends when she recommends J & K Dance Studios to her sister. Ruth is determined to shine on her wedding day, but when stunning dance teacher Kay Giannotti greets Hutch with a kiss, its clear this isn’t the first time they’ve met. Talked into auditioning for “Shall We Dance?,” a TV talent show, the auditions end in tragedy. Accident or murder? Hannah is on the case… 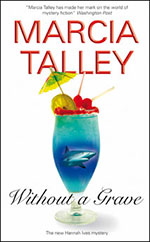 Hannah’s in paradise, enjoying the active, back-to-basics rhythms of Bahamian island life. When controversy arises over the construction of a luxury resort that could devastate the coral reef, Hannah dives in. Acts of vandalism, a deadly wildfire, a missing scientist – Hannah suspects a connection, but her investigation stalls when Hurricane Helen slams into the island. Before the skies clear, a dynasty is threatened by a venomous sibling rivalry, environmentalists face-off against progressive island fathers, and somebody else will die. Gin-clear waters, sand so white you’re blinded by the glare, palms rustling in a tropical breeze. Paradise? Sometimes it’s just an illusion…

Hannah is stunned when a stranger stops her on the street to deliver a message from her long-dead mother. Susan Parker, Hannah learns, is a popular television medium whose accurate predictions leave fans and critics alike puzzled and intrigued. In spite of her skepticism, Hannah schedules a private reading. But on the morning they are to meet, Susan is struck by a hit-and-run driver. An accident? Hannah doesn’t think so—especially when she discovers that more than one person had good reason to want Susan dead… 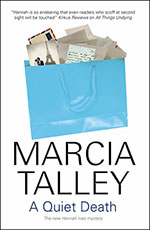 Hannah is returning from a charity luncheon in Washington, DC, when her train is involved in a horrific crash. Although her arm is broken, she remains at the side of her critically injured seatmate until help arrives—but when she is later discharged from hospital, she finds herself in possession of the man’s distinctive bag, and her efforts to return it soon set in motion a chain of events that put her life in grave danger. 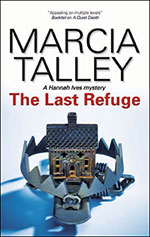 It doesn’t take much arm-twisting to persuade Hannah Ives to join the twelve-strong cast of “Patriot House, 1774,” a reality show recreating eighteen-century colonial life during the turbulent days leading up to the American Revolution. But when Hannah befriends Amy Cornell, a maid on set and the young widow of a Navy SEAL off it, and the crew’s dance master is found murdered, events away from the camera become just as dramatic as those on it. 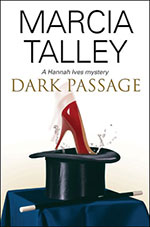 Hannah, her sisters and fourteen-year-old niece Julie set sail from Baltimore on a bonding cruise, and have a dramatic first night when Pia Fanucci, a bubbly bartender magician’s assistant whom Hannah befriends, narrowly escapes injury during an illusion. But while Pia may make light of the incident, it’s no laughing matter when Julie suddenly disappears. Has she gone overboard, or is she injured somewhere on the enormous ship?

To make matters worse, Hannah meets David Warren, a grieving father whose twenty-two-year-old daughter vanished without trace from an earlier cruise. With claims of a proper investigation proving to be an illusion too far, Hannah teams up with David and Pia in desperation. Can they see through the ship’s smoke and mirrors to reveal the identity of a dangerous sea-faring predator? 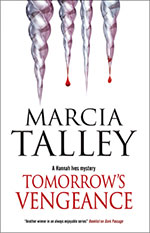 While at Calvert Colony, a life care community center in Maryland, and at lunch with her friend, retired mystery author and amateur painter L.K. “Naddie” Bromley and her neighbor Sophia Milanesi, who survived the closing years of the Second World War in a convent in Italy, Hannah meets Filomena Buccho, a personable young Argentine server. Her brother, Raniero, also works at the Colony as chef. But when Masud Abaza and his wife, Safa, move into the community and Masud is found murdered, his head bashed in by a croquet mallet, suspicion falls on Raniero, who has made no secret of his neo-Fascist sentiments. Hannah and Naddie agree to investigate, uncovering old crimes and reigniting ancient quarrels that know no boundaries of place or time. 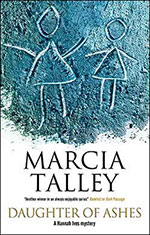 When Hannah loses out on the cottage of her dreams because of an unscrupulous real estate agent, she and her husband, Paul, buy a fixer-upper instead. But contractors restoring the chimney soon make a tragic discovery: the mummified body of an infant.

Hannah, already researching the history of her home in the county archives, is searching for clues to the dead infant’s identity when more shocking events occur. Suddenly, her access to the courthouse is denied and the records she has been examining are slated for destruction. Someone with money, influence or both is trying to make sure incriminating information stays buried. Can Hannah solve the crimes before the evidence and over one hundred years of county history go up in smoke? 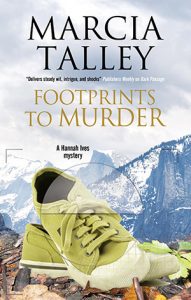 Hannah is delighted to reconnect with her former roommate, Susan Lockley, owner of Scarborough Fairs, at a college reunion, and agrees to step in when Susan’s assistant drops out of managing the Sasquatch Sesquicentennial conference in Flat Rock, Oregon. But when one of the conference guests is found murdered, and gigantic footprints are discovered not far from the body, the culprit appears, or was meant to appear, obvious: Bigfoot.

Fantasy or fact? As the conference disintegrates into chaos, it falls to Hannah to restore order. Working closely with Jake, a retired policeman and his K-9, Harley, Hannah soon realizes that, Bigfoot or no Bigfoot, there are a surprising number of conference attendees with motives to kill… 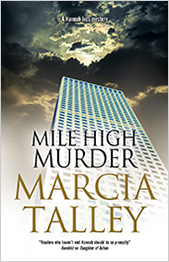 It’s a fact that some of the cancer support group survivors Hannah Ives works with take marijuana. Recreational use of the drug may be illegal in Maryland, but a few patients, like Maryland State Senator Claire Thompson, are prescribed it on medical grounds.

Claire has co-sponsored a Cannabis Legalisation Bill and invites Hannah to be part of a fact-finding task force that testifies before the Maryland State Senate.

Before long, Hannah is in Denver, Colorado—the Mile High City—staying at a B&B with a group of pot pilgrims and medical refugees. But when one of the group is found dead, and a closer inspection of the body reveals the victim had been traveling under a false identity, Hannah is plunged into a dangerous cocktail of deception, drugs and death. 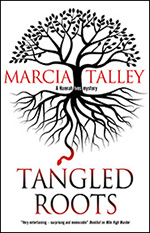 Hannah Ives’s sister, Georgina, has some astonishing news. A DNA test has revealed she is part Native American, and Hannah’s test has similar results. The link seems to come from their late mother. But how?

As Hannah dives into constructing her family tree, she uncovers a heart-breaking love story and a mysterious death, while DNA matching turns up two second cousins, Mai and Nicholas. Hannah and her niece, Julie, are eager to embrace their new relatives and learn about their surprising ancestry, but Georgina’s husband, Scott, isn’t so keen… Are more revelations about to come to light? And can Hannah untangle her family roots to unearth the truth behind a devastating tragedy? 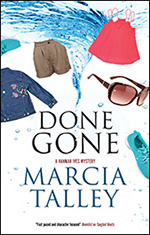 Hannah Ives is worried when her friends and long-time neighbours, Peter and Trish Young, are a surprising no-show at her Italian night. The couple seem to have vanished without a trace. Have they made a quick getaway and ‘done gone’?